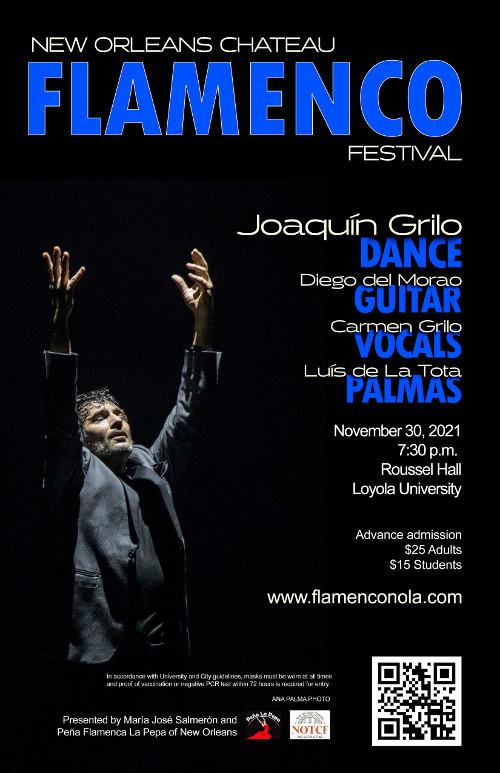 ***PERFORMANCE HAS BEEN POSTPONED***
If you have already purchased tickets for this performance, please contact Peña La Pepa for refund processing.

This first of its kind event will feature world class artists direct from Spain and highlight our New Orleans Culture reviving a tradition that was strong in New Orleans some decades ago when flamenco dancer Teresa Torkanowsky invited her colleagues from Spain to perform with her in a flamenco tablao in the French Quarter called Chateau Flamenco. In honor of Torkanowsky, Grílo´s concert will be part of the inaugural presentation of the New Orleans Chateau Flamenco Festival.

In April 2021, the organization was featured in a book Bulbancha (of many languages) written by a well-known Spanish journalist and writer based in Madrid Spain. This publication chronicles world-renowned artists, musicians, and other figures of the culture of New Orleans and our foundation has been featured to continue the legacy and promote the history of Flamenco in the city.

Mamacita Social Aid Pleasure Club, Inc, and its venue Peña La Pepa of New Orleans is a 501c3 nonprofit foundation dedicated to research, history, presentation and education of Spanish art and its roots in New Orleans. Established in 2014 the foundation’s mission is to integrate into New Orleans Culture an appreciation and continuum of the art of Flamenco through performance and education programming by high quality Flamenco artists.

Joaquín Grilo was born in Jerez de la Frontera, Spain. He took the stage as a child in performances with flamenco companies in Andalucía, and was selected to work as the principal dancer of Ballet Albarizuela. As a young man, Grilo swept numerous awards of several important dance competitions, including the Concurso Nacional de Córdoba and the televised 'Gente Joven,' and also began to perform across Europe. In the 1990s his career took him to Madrid, where he worked in Compañía Teatro Ballet Español, while also moonlighting with the companies of Lola Flores and la Tati, two stars of flamenco. He shared the stage with some of the most important dancers of his time before joining the touring septet of Paco de Lucía. An “empire himself” Grilo has produced withing his own right, a legacy of Flamenco, appearing in major flamenco festivals in Spain and world-wide.

Diego del Morao was born in Jerez de la Frontera is a Spanish Flamenco guitarist. He is the son of the late Moraíto Chico II who he learned to play from and also attended El Carbonero's school. He has recorded live albums such as Confí de fuá, No hay quinto malo and La rosa blanca. He has performed with the likes of José Mercé and Luis Carrasco.

Diego Del Morao is one of the most in-demand guitarists on today's flamenco scene. Son of the legendary guitarist Moraíto, who along with family patriarch Manuel Morao, developed the signature sound of traditional Jerez-style flamenco guitar. Del Morao “takes his family signature sound of traditional funk rhythm Jerez-style flamenco” guitar into the 21st century.

Diego Del Morao's demand as a guitarist soared to new heights in 2004, when he played on recordings by Jose Merce, Nina Pastori, Montse Cortes, La Tana, Potito and more.

Diego became the most studied flamenco compositor by amateur guitarists around the world.

Carmen Grilo, as describe by the LA. Phil:

“Carmen made her singing debut at the age of 8 years old at peña “Los Garbanzos”. A year later she performed her first solo at the Albéniz Theater. In 1995 she performed at the peña “Femenina de Huelva” and in the exaltation of the “Saeta de Jerez”. In 1997 she joined her brother Joaquin Grilo and his flamenco company triumphing at the Palau de la Música and the II Festival de Jerez.

That same year, she joined Manolo Sanlúcar in a national and international tour through Europe and Mexico combining her performances with Joaquín Grilo in the most important theaters around the world.

In 2004 she began working with Mª José Franco in his company touring numerous festivals around the world. She also participated in the shows "Al Compás del Viento" and "Abriendo Puertas" and in all those of Joaquín Grilo since then. In 2012 she collaborated with Manuela Carpio and her show : "Con el alma". Carmen is a sensitive, deep and striking singer, which makes her an artist in constant demand.